It’s not uncommon for consumer and business behaviors to influence major changes in an industry. Consider the constant demand for more storage. Billions of connected devices are expected to generate 155 yottabytes of data by 2021. Only 0.0013 percent (about two zettabytes) of that is expected to be captured, and only 4.2 percent is going to be transmitted to the cloud1 the rest is going to be stored in various types of local storage. Amazing numbers!

This type of evolution within an industry happens constantly, and a few current market trends are driving new changes in the realm of removable storage:

What is the SD Express?

In addition to the many performance advancements, SD Express maintains the long-standing advantage of SD’s backward compatibility and interoperability. The PCIe interface was added alongside the existing SD (UHS-I) interface, allowing a card with SD Express to operate interchangeably in new SD Express capable hosts as well as in billions of existing SD host products in the market today.

The full-size SD Express card uses the same pins and connectors as defined for existing SD UHS-II. As a result, SD Express will not support UHS-II interface. It features a new PCIe and NVMe interface. The differential interface of single-lane PCIe Generation 3 uses the same pads as the SD UHS-II differential interface pads found in the second row of pins. Next, PCIe REFCLK, along with the side band signals CLKREQ# and PERRST#, are shared with the existing SD UHS-I, leveraging the first row of pins. The first row is also the SD UHS-I interface, delivering full backward compatibility and interoperability with billions of existing 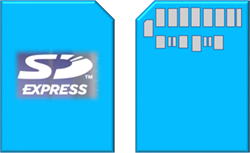 The figure below shows the bit rate performance levels of SD Express:

SDA’s white paper,SD Express Cards with PCIe® and NVMe™ Interfaces, offers more technical details, along with some of the benefits that card and system manufacturers may get by SD Express adoption. The following SD protocol features are supported partially by the PCIe/NVMe interface, assuming use of NVMe version 1.3. In the future, NVMe may fully support these features:

The following traditional SD features are not supported through the PCIe interface:

By relying on successful protocols already in the marketplace, the industry can leverage existing PCIe and NVMe designed blocks as well as existing test equipment, saving on development processes. When companies use existing building blocks of existing designs, this translates to cost savings as well as an improved bottom line.

SD Express is eventually combining the best and most popular protocols for removable memory devices into a single, reliable SD card form factor, as shown in the below figure:

With the existing support of major operating systems and the popularity of drivers supporting PCIe and NVMe, the market adoption of SD Express should be seamless.

With the SD 7.0 specification, the SDA extended the limits of traditional SD memory cards’ capacity to meet the ever-growing needs of users everywhere. In addition to SD Express, the SDA also created SD Ultra Capacity (SDUC) to extend the potential maximum SD memory card capacity from 2TB to up to 128TB. SD Express may be implemented on SDHC, SDXC or SDUC memory cards.

While the sequential and random performance of the existing SD interface may be good enough for most of today’s uses, new applications will require ever-higher performance levels – which may be achieved with the newly released SD Express, using its added higher performance PCIe and NVMe interfaces.

With SD memory cards used for higher capacity as well as for speed-intensive and/or multi-channel applications, there is a growing need for a big jump in random and sequential performance levels as well as more modern protocols. The SD Express feature demonstrates new opportunities for SD memory cards and opens a whole new world of uses while keeping backward compatibility to billions of existing SD hosts, creating benefits for both consumer and industrial users.

Yosi Pinto is Director of standards in the CTO office at Western Digital (former SanDisk) and chairman of the board
at SD Association. Pinto can be reached at
Yosi.Pinto@wdcsandisk.com.

PCI Express® is a registered trademark of PCI-SIG®.

NVM Express™ and NVMe™ are trademarks of NVM Express, Inc.