Most people in the world are decent, upstanding citizens who obey the rules – but not everyone is. That’s why we have institutions and organizations, both public and private, that ensure rule-benders aren’t getting away with misappropriation or illicit activity.

In the technology sector, one of those organizations is SD-3C LLC (“SD-3C”).

And it’s not just about protecting the licensed manufacturers who make the cards – SD-3C’s efforts also protect the consumers and industrial users who rely on devices and SD and microSD memory cards to store content and data. The main issue with counterfeit cards is that the entity making and/or selling them is under no obligation to comply with the memory card standards and specifications set by the SD Association. This means that a user could purchase a product in packaging stating it is a 256GB card, but actually only holds 16GB. Some counterfeiters even go the extra mile by including software that masks the actual storage capacity, so the computer reads the card as having 256GB even though actual capacity is only 16GB.

Other issues with counterfeit cards include card read/write speeds that do not correspond with what is on the packaging, so a user who buys a counterfeit card that falsely promises a certain Speed Class may experience degradation of content, or lower-than-anticipated transfer or streaming speeds. To ensure users are buying SD and microSD memory cards that meet specifications, the organization issues two types of licenses to authorized companies:

Collectively, SD-3C’s actions help to level the playing field to the benefit of SD-3C licensees and consumers, and to the detriment of companies illegally selling SD cards and SD host/ancillary products – and the organization has more than a decade of experience routing out the bad guys.

The History of SD-3C LLC

The SD-3C LLC IP enforcement program began in 2008 following the recognition that certain companies were using SD-3C’s intellectual property without permission, and that SD-3C’s licensees were interested in participating in a fair marketplace.

SD-3C’s initial enforcement efforts focused on collaborating with U.S. Customs and Border Protection (USCBP), the federal agency in the United States authorized to detain and/or seize goods that infringe on federally registered trademarks and copyrights. Over time, the program with USCBP became so successful that additional enforcement programs were implemented across the world. SD-3C has established a mutually beneficial working relationship with customs agencies in all countries where SD-3C has an enforcement program in place, and currently works with customs agencies in approximately 20 countries located throughout Asia, Europe, North America and the Middle East. Additionally, given the prevalence of counterfeit products on e-commerce platforms, in 2013, SD-3C expanded its enforcement program to include e-commerce.

Government agencies also carry out investigative actions of criminal activity, and SD-3C supports these activities. For example, SD-3C has recently been working closely with Chinese customs officials, including conducting multiple education and training sessions throughout China. These recent education and training sessions have resulted in numerous seizures of counterfeit SD goods in China.

SD-3C’s IP enforcement program uses a three-pronged approach to protect their registered trademarks and intellectual property from misappropriation and strengthen the value of the CLA and HALA license: Custom and Border Protection Enforcement; E-commerce Enforcement; and Product Identification Training. 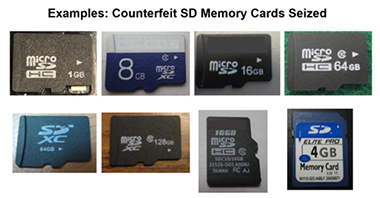 Following the assessment, the customs agency will determine if it has enough evidence to seize the merchandise. If a seizure occurs, SD-3C’s team will receive a Notice of Seizure from Customs, which discloses the importer and exporter, as well as the origin and unit quantity involved.

Based on the seizure information disclosed, SD-3C’s team determines whether any further action is necessary; this may include obtaining a physical sample of the suspect merchandise for evaluation and/or evidence to support potential legal action. If deemed necessary, SD-3C’s team also can submit a supplemental opinion regarding the authenticity of the SD goods.

Since January 2011, SD-3C has reviewed more than 2,700 detentions worldwide, providing responses to customs officials regarding authenticity of memory cards and host products, with the vast majority of cases resulting in seizure and destruction of the counterfeit products. Worldwide seizures from January 2011 through Dec. 31, 2018, totaled 3.9 million products with an estimated retail value of more than $56 million.

In certain instances, a criminal investigation is required, which involves customs officials visiting a target location and carrying out an organized raid. SD-3C also works with law enforcement around the world when SD products are involved in criminal acts being investigated by law enforcement. Infringing SD products are seized to support further legal action against target companies, and timely assessment is extremely important in these types of cases.

Advertisements are monitored using both common and uncommon keywords. As an example, memory card is a common, frequently used, generic term, while “TF,” or Trans Flash, is an antiquated term and, therefore, more uncommon. Advertisements are located on e-commerce platforms based on keyword searches found within the product title, product description or additional information provided by the seller. Searches are also conducted based on a specific keyword and memory capacity combination. Counterfeiters typically misuse terms and memory capacities, resulting in listings offering memory cards that do not exist.

SD trademark uses are compared with the authorized SD trademark to detect any further anomalies. All suspect advertisements are reported for removal through each e-commerce site’s infringement claim program. Advertisements are further monitored based on information obtained from worldwide customs seizures. Searches are conducted based on a company or brand name disclosed within a seizure notification, which often results in locating further counterfeit SD memory cards or SD host products sold online. These are subsequently reported for removal. If visible anomalies and non-compliance issues are detected, a Notice of Claimed Infringement (NOCI) is filed through the IP Rights Owner Program available on the applicable website that is monitored (e.g., Amazon, DHgate, eBay). SD-3C may also opt to purchase a product sample for physical inspection and evidence.

One of the most important parts of the enforcement program is training. SD-3C’s product identification training educates front-line customs and border protection officers on how to identify counterfeit SD cards and SD host/ancillary products at the point of exportation and/or importation. The training also helps customs agents review and process shipments quickly and efficiently. 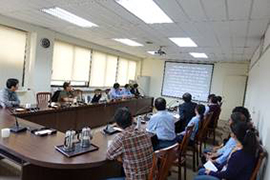 SD-3C provides the following training to customs officials around the world:

One success story occurred in South Korea’s Incheon Airport, where customs officers seized counterfeit microSD memory cards from a South Korean citizen who carried the goods on a flight from China. These microSD cards had a retail value of approximately $900,000 USD – had the cards been genuine. This seizure demonstrates that customs officials are also focusing on counterfeit goods physically carried into a country as well as those that are shipped or imported.

Consumers and industrial users of SD and microSD memory cards can be sure they are getting authentic products by following these tips:

Businesses that buy counterfeit cards (knowingly or unknowingly) to resell them risk losing money as well as product. Customs also would flag them for importing counterfeit goods, adding them to a list of known counterfeiters as well as issuing a hefty fine and penalties. Such a listing would ensure that company’s future imports/exports will be examined closely, and damage the business’s reputation.

A History of Success

SD-3C has more than a decade of working to defend its intellectual property rights and prevent counterfeit SD goods from being manufactured and sold – protecting legitimate manufacturers from unfair competition, lost revenue and brand damage, and helping to ensure that industrial and consumer users receive authentic, high-quality SD memory cards and products.

Michael Quackenbush is License Administrator for SD-3C LLC. Quackenbush can be reached admin@sd-3c.com.