There’s been a lot of buzz lately in the consumer electronics market around one particular letter of the alphabet: K – as in 4K and 8K.

What this means is that photos and videos shot in these formats have amazing clarity, with an incredible amount of detail – a feature consumers are starting to demand in their viewable content, according to IHS.

4K televisions have already entered the market, and many mobile phones and consumer/prosumer still and video cameras now have the capability to shoot in 4K, including brands like GoPro, Samsung, Sony, Google, LG, Canon, Panasonic, Toshiba, JVC and more, and some brands like Panavision even offer 8K – meaning the ability to capture 8K photo and video on mobile devices and consumer cameras may not be that far away

It’s not just consumers who are shooting video in 4K, however – according to a new report from Northern Sky Research, 4K content channels are poised for growth across DTH, cable TV and IPTV platforms. The company identified 2016 as the year of the tipping point, when 4K ultra-HD content via satellite transmission will skyrocket in growth. It predicts that more than 785 new ultra-HD channels will be available to consumers worldwide by 2025 – a new development, as some 4K broadcast services have been available to some consumer markets, including the United States, East Asia and parts of Europe for more than a year, but they are not available widely or across the world.

The NSR report states that by 2017, almost all of the world’s major regions will have one or two UHD channels available for consumer use – right now, Netflix and Amazon video on demand (VOD) is currently available worldwide.

4K and 8K video is not all sunshine and roses, however – there are challenges that come with such luxuries.

4K content bitrates are generally 50MB/sec for consumer and 100MB/sec for prosumer. But broadcast and VOD service providers try to use around 20MB/sec by using a highly efficient VOD encoder.

The Challenges of Ultra HD

The quandary is that these 4K and 8K video and photo files, while beautiful, clear and highly detailed, take up an incredible amount of storage space on mobile devices and cameras – up to four times as much.

A one-minute 4K video recorded at 30 fps, at 50MB/sec will take up 375MB on a phone, more than a third of a GB – which doesn’t sound like much, until you consider that is just for a single-minute recording, and that a typical smartphone also stores other photos, videos and music, plus apps. On a high-end prosumer video camera (100MB/sec), a single minute can be a single GB, and one hour of video footage would be a whopping 42 GB, while 25 hours of 4K is roughly 1 terabyte.

4K also consumes a lot of memory bandwidth as it is being recorded as video, especially if there are multiple file types involved (for example, if 4K video is being recorded while HD photos are simultaneously captured, or if both raw and JPEG still images are being saved – both common practices, especially among prosumers).

This ultra-high-definition content also consumes memory on mobile devices while it is buffering and being viewed, and requires a high transfer rate to decode the 4K streaming signal: True 4K streaming needs at least 20MB/sec-plus bandwidth for good quality. This means that when VOD services like Netflix send the main content signal as well as a high-dynamic range (HDR) signal for 4K content, the device on the other end has to be able to decode the HDR signal to play the content in 4K. Most devices have no trouble decoding a standard signal, but the HDR signal requires a higher transfer rate to decode. 4K in theory can be compressed at approximately 10 to 12MB/sec, but frame rate may be reduced or quality may be lost. 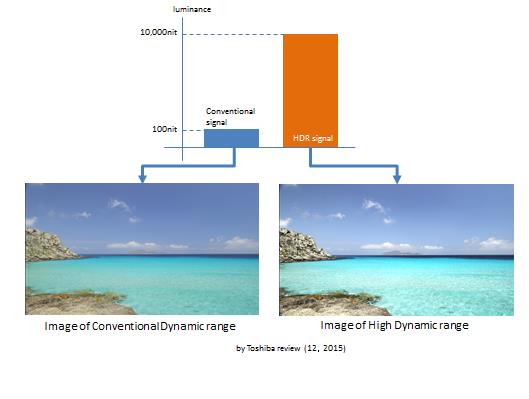 In order to keep up with the data transfer rates and memory usage that recording, storing and playing 4K and 8K content will require, consumers will need a lightning-fast, high-capacity option. Further, V30 microSDXC memory cards with UHS-I or UHS-II are ideal for recording (due to their speed at processing massive amounts of data between a mobile phone or camera and a memory card) and storing (due to their removability and mobility, giving them an advantage over non-mobile technologies like solid-state drives), as well as streaming.

The SDA introduced a new standard for memory cards in February 2016, called the Video Speed Classes, in response to the industry adoption of multi-file and ultra-high-definition 4K/8K, 3-D, 360-degree video and multi-file recording, all of which require extended capture performance of up to 90 MB/s. Video Speed Classes makes it easier for users to play back or record high resolutions of video on their mobile devices.

For example, for the prosumer market – consumers who use professional-grade still cameras and video cameras like GoPro, or even drones, to film high-quality footage – the need for clearly defined Video Speed Classes was critical because of the higher data transfer speeds 4K/8K resolution demands.

The Video Speed Class also supports real-time multi-file recording — valuable for devices like 360-degree cameras or drones, which are primarily used for video recording but may also use additional data simultaneously, including collecting GPS coordinates and taking high-resolution photos. Matching a device with cards that support at least the same Video Speed class assures smooth data transfer and video capturing.

All speed classes guarantee minimum video recording speeds to ensure smooth video playback, so actual recording performance may be even faster. Minimum speeds range from 6 to 90 MB/s. The fastest options, V60 and V90, are usually associated with 8K resolution, while V6, V10 and V30 are associated with high-definition and 4K resolution (refer to Figure 1). 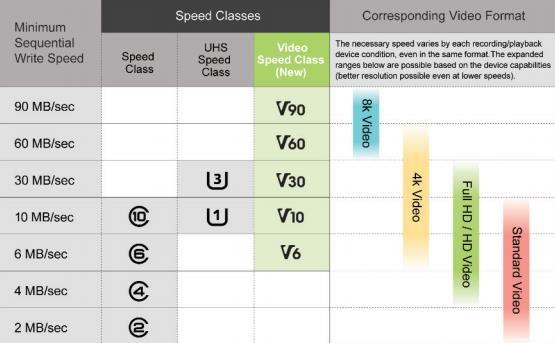 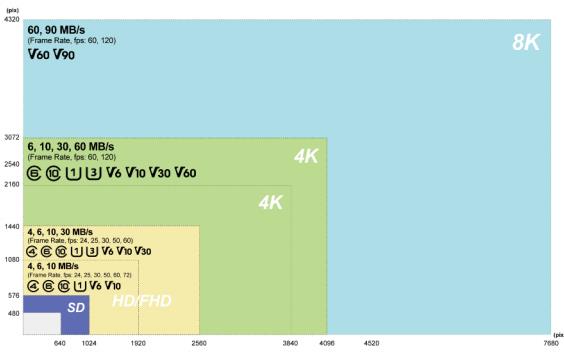 Since SD memory cards are removable and mobile, they allow anyone to record large amounts of ultra-high-definition content on a mobile device’s SD card and then simply replace the card when it is full.

This user upgrade for memory expansion, rather than limiting a user to whatever embedded memory comes with the mobile device, is cheaper and environmentally responsible. Consider that for some drones and smartphones, users can’t upgrade their memory and must be near a computer or tethered technology like a solid-state drive in order to gain additional storage to capture all the content they want. SD memory cards offer storage up to 256 GB – allowing about 10 hours of 4K video on one small card.

If a consumer is playing back a previously recorded high-quality 4K video of high frame rate on a mobile phone, by using an SDXC or SDHC memory card, the user may achieve 20 to 50MB/sec bandwidth; a V30 or V60 Speed Class card is easily able to accommodate that transfer rate with no delay.

Additionally, these cards can help when mobile device users are downloading and streaming high-resolution content in VOD apps like Netflix via side-loading. If a mobile user has a lot of apps installed and also tries to stream high-definition content, it can quickly eat up the available memory on the device and cause slower buffering, which can make playback quality poor. With an SD memory card installed, the device has more available memory space, meaning the device has plenty of memory/data storage for both the apps that live on the device as well as the streaming content.

Streamable 8K content is not widely available yet, but might be just around the corner. Japan began the world’s first regular 8K television broadcasts this past August, just five days before the opening of the Olympic Games. NHK refers to it as “Super Hi-Vision” and currently has a satellite channel that will broadcast a mix of 8K and 4K content as it prepares to launch full-scale 8K transmissions in time for the Tokyo Olympics in 2020. The plan to broadcast the games in 8K was announced right after Tokyo was awarded the 2020 Olympics.

SD Cards: Ready for the Future

It’s an exciting time for anyone interested in recording and viewing ultra-high-quality video and photo – and this technology isn’t just for high-level professionals; it is available to regular consumers as well. The only requisites for shooting UHD video/photos on a 4K-enabled phone or camera are first, enough SD memory to store it, and second, a way of getting the content from SD card to PC (and many PCs have an SD card slot). Giving consumers the ability to record 8K video on a mobile device is the logical progression for smartphone manufacturers, and the V60 and V90 Video Speed Classes as well as cards that can store up to 2 TB will enable the recording and storing of this unbelievably high-resolution content.

By keeping up with the leading-edge technology of the day through the new Video Speed Classes and large-format expandable storage options, SD memory cards allow a way for consumers to extend their current devices’ storage and record, store and stream this content – both for the present, with 4K, and in the future, with 8K.

Noriya Sakamoto is chief specialist at Toshiba Corporation Microelectronics Center. Sakamoto can be reached at noriya.sakamoto@toshiba.co.jp