Silicon foundries have been fine-tuning system on a chip (SOC) integrated circuit technology for use in devices such as smartphones, with recent progress pushing the powerful chips to the 7-10 nanometer range. These SOC developments will enable smartphones to offer higher performance with less power consumption. Designing SOC’s, which use finer processes and lower voltage supply, is easier when restricted to 1.8V signaling.

SD memory cards have used a 3.3V signaling interface since the SD standard was introduced in 2000 and through SD Specification 3.0, when 1.8V signaling was added with the UHS-I bus mode, the ultimate removable single-ended interface. UHS-I adopted 1.8V signaling because it is suitable for faster rise/fall time and lower electromagnetic interference. However, UHS memory cards still require 3.3V signaling to initialize the card so hosts need to support 3.3V signaling, too. UHS-II is another option for a low-voltage interface for host devices supporting that specification and offering 1.8V power supply. Therefore, UHS-II is a solution for higher performance applications which require more than UHS-I performance.

An LV symbol identifies LV Interface supported SD products for users. An LVS host will bear the LV symbol somewhere on the product, package or manual. LVS device users need to use a corresponding SD memory card with an LV symbol for their LV-marked device. On the other hand, an LVS card is usable by any host, including hosts that do not carry the LV symbol. 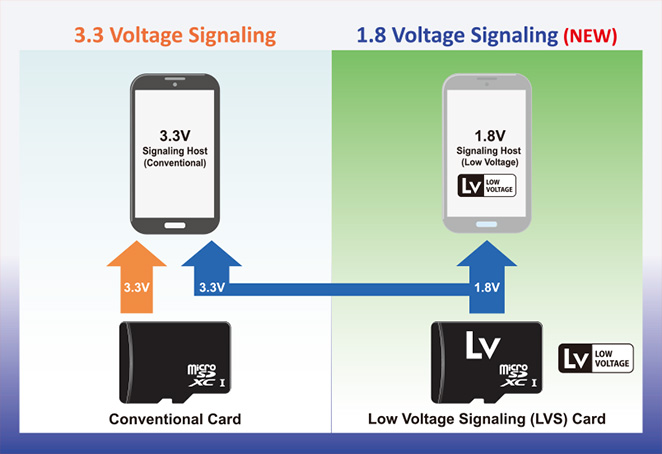