While the average consumer uses a smart phone to take pictures, professional photographers need the quality and features that high-end digital cameras offer. But even the best camera will not perform at its maximum level without the appropriate memory card. Certain characteristics such as speed are critical for capturing a valuable image, especially for action photographs. Below are the most important considerations photographers should consider when selecting memory cards.

Before beginning the search for the perfect memory card, make sure to read your camera’s user manual and confirm what types of cards are supported. Characteristics such as maximum supported capacity (SD, SDSC, SDXC) and/or minimum performance class are usually provided by the camera manufacturer. Sometimes the manufacturer will even define several minimum performance requirements by usage (HD video capturing, still pictures, etc.). The following information provides some clarification about the various symbols or marks used to indicate the different classifications.

If the SD memory card does not operate at the optimal speed for photography applications, it will most likely fall behind and lose the race in number of images per frame– especially when shooting Full HD/4K video. Every memory card operates with two actions: write and read (WR/RD). The two different types of speed parameters are commonly provided by memory cards:

Speed Class is a standard defined in SD specifications (see table) to assure card performance used by any device that operates a specific Speed Class. It is important to knowthatSpeed Class ensures minimum performance as long as your camera supports Speed Class (again, check your user manual)

indicated on the card. It is crucial that both the card and the camera must support the same Speed Class to guarantee specific performance. 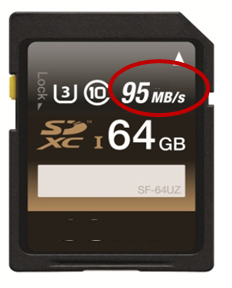 The maximum supported write and read speed rates are not standardized by SD standards. These rates are usually marked in Bytes per second [i.e. 95MB/s = 95 Mega Bytes per second] and are provided by the memory card manufacturer. It’s important to know that each card manufacturer uses their own criteria of measurements and may only provide a general impression about the card’s capabilities to the consumer. If only a single rate is marked – it is usually the read capability of a card, so it is recommended to check the card’s retail package for the read capability number. 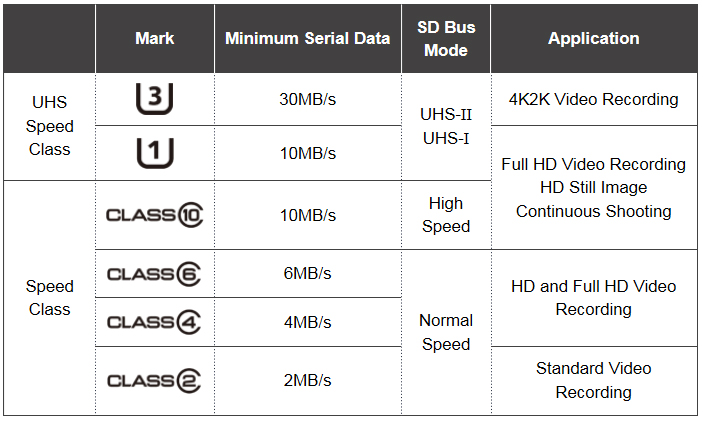 Write speed is the rate that the memory card can save images. Choosing a card with the minimum required speed is imperative for proper camera operation. In addition, high rates of maximum WR/RD speeds are highly recommended for photographers who shoot many frames per second in continuous shooting mode. For example, sport photographers cannot do their craft well without a high WR/RD speed that can handle bursts of continuous shooting. It is equally important for recording HD video and shooting large files with high resolution cameras.

In other words, having a memory card that meets your camera’s Speed Class rates is the minimum requirement to delivering on the full capability of your camera. However, using high speed write/read cards is also important for an improved picture taking experience, which in some cases means the difference between catching a specific moment or missing it. Most cameras take pictures faster than the image buffer can transfer them. When this happens, the buffer fills up and the camera ceases shooting until enough images have moved from the buffer to the card. Once this movement occurs, the camera resumes taking pictures. A faster memory card helps move this process along to extend shooting time. The user can click away, taking as many pictures as they want without worrying about missing a piece of the action. On the other hand, if the card is too slow, the camera’s buffer memory will fill up and stop recording prematurely.

Read speed is measured by how fast devices, like computers and printers, can retrieve data from the card. The faster the read speed, the faster the card will transfer images more quickly.

Of the two speeds, write speed is most important for photography and should be given priority over read speed. You can find an SD memory card’s speed class on the card itself or its packaging, as well as an online store listing.

Consult your owner’s manual to ensure your camera supports UHS-I. If the camera was made in the past couple of years, it might already be compatible. Today, there are cameras in the market that also support the UHS-II interface.

You may be asking yourself why anyone would want to buy UHS-II cards and cameras. Especially when already affordable SD memory cards (such as UHS-I with up to 90MB/s write speed) can capture a standard JPEG image file even while using the perpetual burst/continuous shooting. But there’s another image quality issue to consider. JPEG formats typically only come standard with eight bits per pixel. But while digital cameras come pre-set to produce the best images possible, their factory settings may differ from individual user preferences, such as when he or she wants to manipulate white balance, brightness or other settings.

In this scenario, JPEG files simply don’t have the bandwidth. As a result, most DSLR camera manufacturers offer RAW formats, typically with 12-to-14 bits per pixel. The RAW format is nearly universal for professional photographers and high-end camera lovers, so maintaining original quality with wider range of post-processing options becomes the focus as RAW files tend to be larger. A good rule of thumb is that every 20M of pixels require 250 megabytes of storage.

Because of the larger RAW file size, users may reach the buffering limits on their camera sooner than expected, particularly when shooting in bursts, as perpetual-burst photography can command more than 250Mbytes per second, even on cameras with shutter speeds as low as 10 frames per second. In these cases, UHS-II cards and their interface allow for smooth, and continuous, burst shooting without the risk of missing that special moment.

Again, it is important that your camera supports the UHS-II feature. A few such cameras already exist today and it is expected that UHS-II feature will be supported for non-professional users at an affordable price, due to lower internal camera memory buffering requirements, in the future.

Higher memory storage levels equal larger video file storage capabilities – so the more gigabytes a memory card can store, the more video it can shoot. This is an important differentiator for photographers who shoot long HD or 4K videos. And for photographers who focus on still shots, more memory capacity is still a win. Of course, regardless of needs, the rule remains the same: it is always select a memory card compatible with your camera.

All SD memory cards are not created alike. The following information can help you determine, according to capacity, which type of memory card fulfills your needs:

Most devices support SDHC, while SDXC is newer to the market and most new cameras and professional lines support SDXC.

HD and 4K video consumes significantly more storage space than standard video – about twice as much – and will fill up a memory card at a faster rate. This makes storage capacity a key factor in determining how much video you can capture on a card. Make sure to look for higher memory capabilities if you are going to shoot in HD and 4K. Higher gigabyte cards offer longer recording times, so always remain aware of the time length you need from your card. The last thing you want is to run out of space in the middle of a project.

When you consider all of the above factors, your chances to select the best memory card for your photography needs will be quite favorable. And in capturing every memorable moment, you will also capture opportunities that benefit your photography business.

Tom Ando is a general manager for Canon Inc. He is in the ASIC development division and specialized in image processing, video codec and storage media interface. Ando is the Co-Chairman of the Compliance Committee and a board member of the SD Association.