As long as data caps, wireless network gaps and security concerns continue to exist, there will always be challenges retrieving content over open networks. The ability to store content locally and access it via smartphone will be necessary as long as the creation and consumption of data continues to grow at its rapid pace – and microSD memory cards can create a consistent, seamless and enjoyable user experience while also providing local data storage.

Current capacities for microSD memory cards range from 1 GB to 512 GB, depending on the manufacturer, and with technologies continuing to advance, it won’t be long before there is a 1 TB card on the market. Despite the massive storage capacities available today, they won’t be enough to deal with the explosion of higher-resolution video and photos, not to mention the sheer numbers of photos taken every year: InfoTrends predicts 1.2 trillion photos will be taken in 2017.

The rise of photo- and video-centric apps like Snapchat and Instagram especially have fueled the need for larger amounts of storage as higher-quality smart phone cameras continue producing higher-resolution photos and videos. Higher-resolution content means each picture or video size is much larger; plus, these photos and videos now store geolocation and other metadata, further increasing the file sizes. Consumers can quickly use up a phone’s factory storage and need expandable options – which is one reason why, according to Strategy Analytics, SD memory card usage will continue to rise.

The fingertip-size microSD memory cards deliver value to consumers and manufacturers across numerous industries, making products more affordable for consumers while enhancing the capabilities of the product itself. In the past, many applications only required sequential writing to a card, but now they need to be able to handle both sequential and random writes to accommodate sound, photos, videos and applications.

Over time, the SDA implemented microSD, microSDHC and microSDXC card standards for manufacturers to meet increasing storage needs. It developed the Ultra High Speed (UHS) standard to speed the processing of massive amounts of data between a device and a memory card. microSD also can accommodate additional capabilities, such as near-field communications (NFC) and Secure Elements in SMART microSD memory cards.

Video Speed Classes were introduced in February 2016 in response to the industry adoption of multi-file and ultra-high-definition 4K/8K, 3-D and 360-degree video recording, all of which require extended capture performance of up to 90 MB/s. Video Speed Classes make it easier for users to play back or record this resolution of video on their mobile devices, as well as on drones and action cameras. Video Speed Classes also create a pathway to retire the legacy Speed Class ratings as those minimum speeds become unnecessary.

The Application Performance Class standard defines a method to ensure apps run smoothly from a card. The A1 and A2 classes offer an assured combination of minimum random and sustained Sequential performance levels under specified conditions. A1 and A2 marks make it easier for consumers to determine which card they should purchase at the point of sale, and to avoid getting a slow card warning message after inserting the card into their Android or Microsoft device.

The App Performance Class delivers more variety in the marketplace for consumers and product manufacturers, and caters to users that need a higher-performance card to match their higher-performance mobile phones or mobile computers. This gives users and product developers the flexibility to optimize cost performance needs for their product and applications requirements for their intended market segments. All of this creates more demand for microSD memory cards.

The graphic below shows how manufacturers can guide users to the right App Performance Class card to match their products’ requirements.

Some mobile device manufacturers have a closed product strategy: A phone has a predetermined storage volume built into the phone – no more, no less. This allows the manufacturer to significantly increase their profit and the retail price for more built-in storage, but it prohibits a customer from expanding their storage volume by using microSD memory cards. This can reduce the flexibility of the device and usually forces the customer to upgrade the phone, or pay for costly and less secure cloud storage to gain more space.

Despite the growth in cloud storage and embedded NAND Flash storage on smartphones, the inclusion of memory card slots in smartphones has never been stronger. According to Strategy Analytics, the “latest generation of microSD cards are faster, bigger capacity and offer significant performance improvements over those of yesteryear and are finding favor again with almost every smartphone OEM.”

Strategy Analytics mentions the highlights of the latest cards based on versions 5.1 and 6.0 of the SD specification: “Application Performance Class provides a guaranteed minimum performance when you run your apps directly from the SD memory card, while UHS Speed Class 3 and Video Speed Class V30 support read/write speeds that are fast enough to save your 4K videos directly onto the card rather than saving them to embedded memory first and then transferring the file later.” 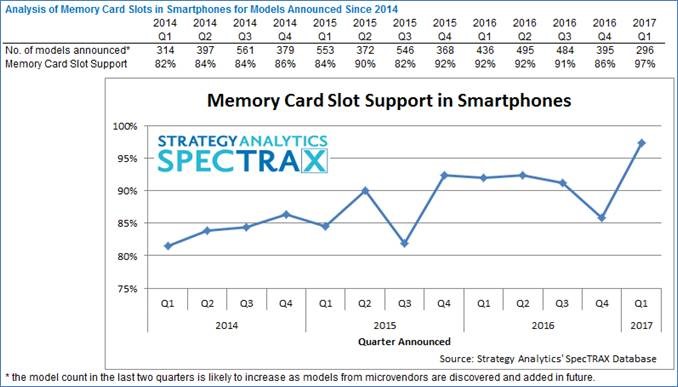 There are a few interesting anomalies:

In general, this graph shows some very promising data that the microSD still remains the dominant removable form factor for smartphones. The introduction of the A1 and A2 standard will enable consumers to store apps on card-equipped Android and Microsoft phones. This new capability for the card will be significant in keeping it relevant for years to come.

In early 2016, Apple updated the beta app of Apple Music for Android to allow users to store music on a microSD memory card. This is available in any device that supports expandable storage, offering yet another way for users to decrease storage use on a phone or tablet and lower data streaming. Music- streaming service Spotify also allows Android users to switch storage of offline tracks from a phone’s internal store to a microSD card.

Amazon’s Fire tablet now supports microSD cards of up to 128 GB, even allowing a user to read e-books from the card. Files can be transferred to a tablet from a computer by using either the computer’s microSD slot or a USB-connected microSD memory card reader. In addition, Amazon Prime’s Instant Video service now allows its users to download content and view it offline on iOS and Android devices. This will enable users to reduce data use by downloading television shows and movies to their devices using Wi-Fi, saving the content to their microSD memory cards and then watching on demand. With microSD, users even have the ability to view content on airplanes or trains without Wi-Fi or when traveling internationally, when data charges could be higher, or when certain content is not available due to geography restrictions.

In early 2017, the latest version of the Netflix app began letting Android users store downloaded movies and TV shows onto their cards.Roku player users can use microSD cards to increase memory on the player and expand storage for owners who had or intend to have a large number of channels and/or games installed onto the player.

Embedded solutions are being used on a smaller level, but will continue to grow. An example is Raspberry Pi, a small, affordable PC-like computer that is popular in Europe. It can be integrated into various industrial applications and uses microSD memory cards for storage. The company provides recommendations on how to size them on its website.

Automotive and aviation, as well as most manufacturing facilities, will be growth areas in the future because of microSD memory cards’ expandability and removability. The automotive realm especially has started to see more GPS and mapping systems and tools stored in microSD cards.

Surveillance cameras and similar products have begun using microSD memory cards as well. The cards’ small form factor allows surveillance systems to use miniaturized cameras that store data within the camera. The card can be removed at intervals for surveillance video to be uploaded to the cloud or server, while current video is stored locally on the card.

As the Internet of Things (IoT) continues to expand, as well as extend into the home, local storage will be used alongside the cloud. There will be a tremendous number of objects gathering far more data than we currently collect, and often that data will have to be acted on rapidly.

Many connected devices – which are embraced for their instant analytics and adjustments – will require storage; microSD memory cards are an ideal solution because of their compact size and value as well as expansion options. While connected devices need fast processors, onboard local storage will help ensure data can be accessed quickly and securely stored.

The SD Association continuously creates SD specifications to anticipate or respond to many diverse user needs. Dedication to consistency and interoperability has made microSD memory cards a trusted consumer favorite – and in many cases, a necessity. While digital technologies are transforming what we do and how we do it, the SD Association is simplifying and scaling the very heart and soul of the device.

Brian Kumagai is the president of the SD Association.